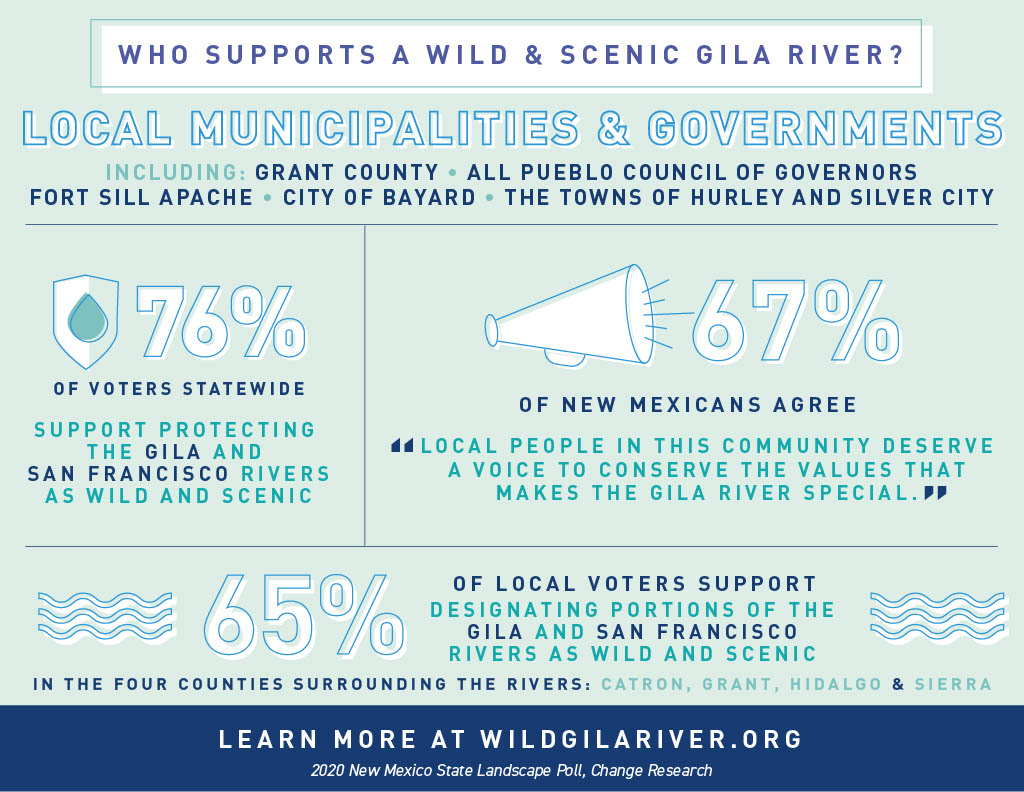 The survey found that in the four counties surrounding the rivers — Catron, Grant, Hidalgo, and Sierra:

The survey was conducted by Change Research, and commissioned by the Southwest Green Chamber of Commerce. The firm conducted 396 interviews between November 21-25, 2019 and December 6-7, 2019, with a margin of error of 5.9 percentage points.

“The Gila and San Francisco Rivers are the lifeblood of our communities, and we depend on them for food, jobs, and places to get away,” said Silver City Town Councilor Guadalupe Cano. “This survey tells us what we already know: that people want the Wild Gila River to be here for our children and grandchildren.”

The Gila and San Francisco Rivers and their tributaries compose one of the largest undammed watersheds left in the Lower 48. To date, only .01 percent of the 108,104 miles of rivers in New Mexico are designated as wild and scenic.

“As a Sierra County property owner and sportsman I treasure the wildlife habitat and free-flowing waters of the Gila and San Francisco Rivers. I want to thank Senators Tom Udall and Martin Heinrich for their leadership and look forward to them introducing legislation to preserve these rivers for future generations,” added David Soules.

Designating the rivers and tributaries as wild and scenic will sustain the local, rural economies that depend upon time-tested traditions like grazing, ranching, and hunting and fishing. Grazing and ranching would continue surrounding the segments designated as wild and scenic. Additionally, development on or roads to private land would not be impacted. Hunting and fishing access would not only be ensured, but the designation would safeguard critical habitat needed to sustain land and water wildlife populations.

John Trujillo, an avid hunter and angler who frequents the Gila area, said, “Hunters and anglers have long understood the value of the Wild Gila River. It is where we go to find peace and unwind, and where we harvest food to sustain our families. I am not surprised to learn that my friends and neighbors overwhelmingly support protecting the Gila and San Francisco Rivers.”

Safeguarding the Gila and San Francisco Rivers and their tributaries as Wild and Scenic will also enhance local economies through increased outdoor recreation activities like rafting and paddling, horseback riding and wildlife watching, and hiking and camping.  Outdoor recreation is big business in New Mexico: Every year it generates nearly $10 billion in consumer spending, roughly $3 billion in wages and salaries, $623 million in state and local tax revenues, and directly employs 99,000 people.

“People come from near and far to explore all the Gila and San Francisco Rivers and the lands they sustain,” added Gordon West, President of the Southwest New Mexico Green Chamber of Commerce. “If our ‘main attraction’ dries up, many business owners would lose their livelihoods.”

A diverse coalition is now calling on Senators Tom Udall and Martin Heinrich to introduce legislation to designate portions of the Gila and San Francisco and their tributaries as wild and scenic.  As Senator Udall prepares to leave the U.S. Senate, stakeholders are calling on him to leave these river protections as his legacy for future generations.