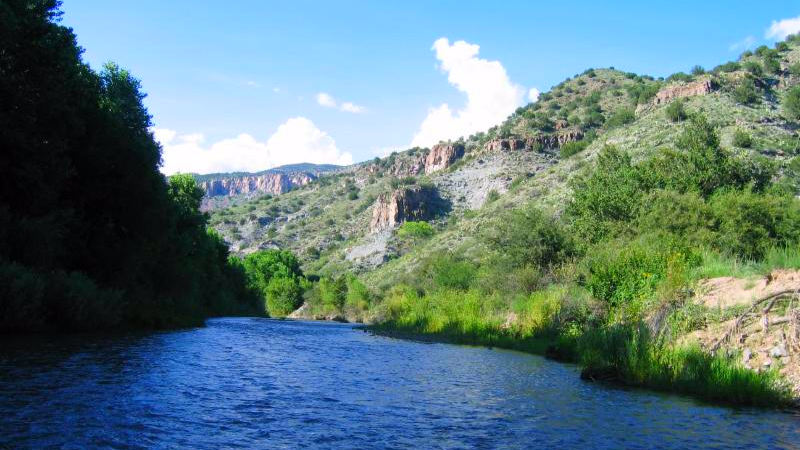 U.S. Senator Martin Heinrich (D-N.M.) is preparing to reintroduce legislation to designate portions of the Gila River, its watershed and other rivers in the Gila National Forest as Wild and Scenic Rivers. Senator Heinrich acknowledged the growing support for the Wild & Scenic designation as part of the Gila Wild and Scenic Rivers of Opportunity Conference in Silver City, New Mexico.

“I’m grateful to all the local stakeholders and community leaders in southwestern New Mexico over the years who provided input to make sure we got this legislation right,” said Heinrich during his remarks. “And I am humbled by all the New Mexicans who have devoted themselves to protecting the Gila for future generations.”

The Greater Gila watershed, which includes the San Francisco River and other main tributaries, comprises the largest remaining network of naturally flowing river segments in the Southwestern United States. New Mexicans have cherished the Gila for generations for its spectacular scenery and wildlife habitat, shared family experiences, unique fishing and recreational opportunities, abundant cultural resources, and as a clean water source for countless traditional uses.

Heinrich added, “My legislation would permanently protect the Gila’s free-flowing segments, attract more visitors to southwestern New Mexico, and grow our outdoor recreation industry. It will preserve the extraordinary scenic values found along many of the river segments.”

Senator Heinrich’s full remarks as prepared for delivery are below.

It is an honor to share a few words with you ahead of the Gila Wild and Scenic Rivers of Opportunity Conference in Silver City on October 8th and 9th.

I have no doubt that the conference will bring together some incredible champions for our state’s wild lands and waters. In New Mexico, we know that water is life.

There are very few places left where you can understand what that truly means.

I can think of no greater example than the headwaters of the Gila in southwestern New Mexico.

The upper Gila and San Francisco rivers are some of the last naturally-flowing tributaries of the greater Colorado River watershed.

100 years ago, the spectacular landscapes and ecosystems shaped by these waters inspired a young forester named Aldo Leopold to call for the establishment of America’s first wilderness area.

Aldo Leopold foresaw that we needed to set aside wilderness areas to protect what he called the last big stretches of wild country.

That foresight allows today’s visitors to the Gila—including myself—to see much of the same glorious landscapes that inspired Leopold so long ago.

As long as I have lived in New Mexico, I have always been drawn to the Gila.

Trips into places like McKenna Park, Turkey Feather Pass, the Jerky Mountains, and the Middle Fork have given me the time and space to grow closer to my family and friends and to reflect on what is truly important.

But we need to recognize that to truly protect the Gila’s wilderness character, we need to conserve its wild and scenic waters.

When you look at our rivers today, particularly in the American West, you’ll find that nearly all of them are now shells of their former selves.

To see what has been lost in our rivers after more than a century of dams and development, just look downstream on the Gila River in Arizona.

Before it was dammed and developed, long stretches of the Gila in Arizona flowed year-round.

Today, after the Gila reaches the Coolidge Dam, the river is almost entirely de-watered as its path winds through the Phoenix metro, tribal lands, and major irrigation fields.

And over the last century, there have been numerous proposals to construct similar dams or large-scale diversion projects to de-water the Upper Gila in New Mexico.

Thankfully, those proposals have all failed.

That means we still have some of our few remaining wild and free-flowing segments of river in New Mexico and the entire Southwest.

It’s long past time to protect these segments as Wild and Scenic.

Since Congress passed the Wild and Scenic Rivers Act in 1968, this designation for our most treasured rivers has supported enhanced water quality, economic development, and increased recreation opportunities.

That includes New Mexico’s Rio Chama, the East Fork of the Jemez, and sections of the Rio Grande and the Pecos.

It will preserve the extraordinary scenic values found along many of the river segments.

And it will help us protect critical habitat for unique native species like the Gila Trout, the Gila chub, and the common black hawk.

I’m grateful to all the local stakeholders and community leaders in southwestern New Mexico over the years who provided input to make sure we got this legislation right.

And I am humbled by all the New Mexicans who have devoted themselves to protecting the Gila for future generations.

That includes Ella Jaz Kirk, Michael Mahl, and Ella Myers. And it includes the lifelong champion of the wild Gila River, Dutch Salmon.

I can’t think of any better way to honor the memory of these New Mexicans who fought so hard for the Gila than permanent protection of this wild and scenic river.