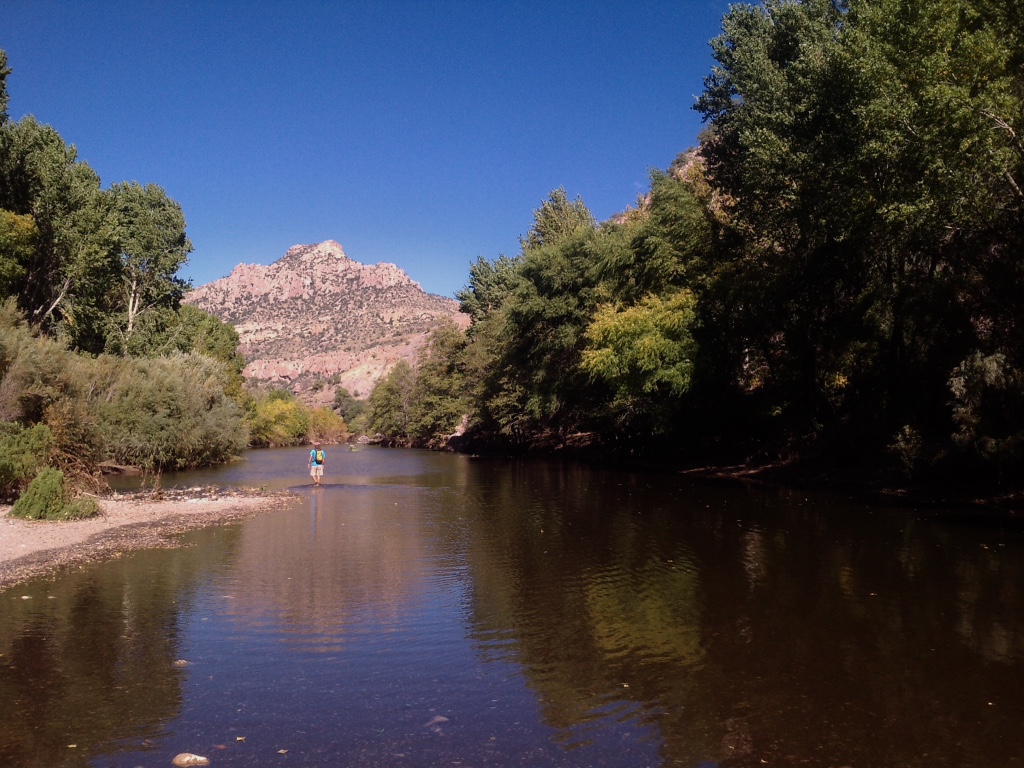 U.S. Sens. Tom Udall and Martin Heinrich announced Tuesday that legislation to protect 450 miles of the Gila River system under the 1968 Wild and Scenic Rivers Act was introduced in the Senate late last week.

Members of the agricultural community and some private landowners along the river, as well as the New Mexico Entity of the Central Arizona Project — which has plans to build a series of diversions, water storage ponds and conveyances along the Gila and San Francisco under the terms of the 2004 Arizona Water Settlements Act — submitted objections and proposed language additions to the preliminary draft of the bill.

The final version of the M.H. Dutch Salmon Greater Gila Wild and Scenic River Act is much more detailed than the earlier discussion draft of the bill, and also plainly states that “[n]othing in this section amends or otherwise affects the Arizona Water Settlements Act.”

“That was one of our primary concerns,” said Howard Hutchinson, a supervisor for the San Francisco Soil and Water Conservation District, which he represents on the Entity’s board. “That nothing in the proposal mentioned the AWSA water.”

After reading the final version, Hutchinson shared his take on the bill as it was introduced.

“The proposed language did not include any of [the N.M. CAP Entity’s] suggested language,” Hutchinson said. “As stated in our comments, even if our suggestions were incorporated, we are opposed to any designations for the San Francisco or Gila rivers.

“The history of litigation that affects property owners either above or below designated segments is the only reason to designate streams and rivers as Wild and Scenic,” Hutchinson continued. “The original purpose of the act, as stated by Congress, was to prevent erecting dams or dewatering of streams with outstanding or remarkable values. Prevention of the development of the AWSA water is the only reason the proponents are pushing this down our throats.”

“The bill explicitly says existing water rights, grazing rights [and] existing water distribution structure can’t be taken away,” Heinrich said during a joint press call with Udall on Tuesday morning. “We made changes to better maintain current uses, like grazing, as well as make possible things like the development” of broadband infrastructure, for example. “We explicitly wrote into it that condemnation without the consent of the landowner or land manager is not allowed.”

“This balanced legislation, developed after extensive outreach and taking into account a diverse array of New Mexico voices, will permanently protect the Gila’s traditional uses and benefit the regional economy for the long term,” Udall said. “After listening closely to New Mexicans, we are beginning the formal legislative process — introducing legislation that will preserve the Gila River for generations to come. Support for protecting the Gila is deep and widespread.”

Udall, the bill’s sponsor, invoked the name of his conservationist father, who was U.S. secretary of the interior under President Lyndon Johnson when the original Wild and Scenic Rivers Act, among other landmark pieces of environmental legislation, was passed by Congress.

“My father, Stewart Udall, helped to enact the Wild and Scenic Rivers Act because he knew that preserving wild places was the right thing to do for our children and our economy,” Udall told reporters. “This legislation is a ray of hope for the future, and it will help to build and protect local economies at a time when they need it the most.”

Heinrich, who worked alongside Udall to craft the legislation, also name-checked the many conservationists and environmental protection advocates who inspired the legislation, including Aldo Leopold, for whom a portion of the nation’s first designated wilderness area — the Gila Wilderness — is now named.

Heinrich also noted that President Theodore Roosevelt’s philosophy that “conservation means development as much as it does protection” also played a part in forming the bill.

“After more than 100 years of implementing his vision, we have seen that conservation can drive the economy,” Heinrich said. “And some of the greatest job growth [related to outdoor recreation] came after the Great Depression and Great Recession.”

Heinrich tipped his hat to the bill’s namesake, longtime Grant County resident M.H. “Dutch” Salmon, who devoted the second half of his life to promoting and protecting — and writing about — the Gila River system and the surrounding forest and desert. Salmon, who co-founded the Gila Conservation Coalition in part to battle several diversions proposed on the Gila since the early 1980s, died in March of last year at age 73.

“If any place deserves Wild and Scenic River designation, it’s New Mexico’s Gila River. There are very few places left on Earth where you can understand what the saying ‘water is life’ truly means,” said Heinrich, a member of the Senate Energy and Natural Resources Committee, in which the bill now sits, its first stop on the way to becoming law. “I can think of no greater example than the headwaters of the Gila — a place near and dear to my heart and special to so many New Mexicans.”

“They took off in a plane to work on an ecological monitoring team” project, Heinrich said. “All three of these classmates spent their lives on the Gila River, and they died while they were working to conserve and protect the Gila.”

“Wild and Scenic designation will contribute positively to the tourism economy, and also will help the ecosystem flourish,” Crockett said. “I am really excited they have introduced this legislation that we have been putting together for the last couple of years.”

After Udall noted that the bill, which will amend the Wild and Scenic Rivers Act to include the designated segments of the Gila as part of the National Wild and Scenic Rivers System, first needs to be approved by both chambers of Congress and then signed into law by the  president, Heinrich added: “I can’t tell you when this bill will pass, but I can tell you that it will pass.”

This article originally appeared in the Silver City Daily Press.

Celebrate 50 years of Wild and Scenic with more designations